January 2016 sees Huntsman welcome Chinese superstar Hu Bing back to London as part of the London Collections Men season. Hu is the British Fashion Council’s only International Ambassador, an appointment that come about as a result of his entrenched relationship with the world of luxury menswear and his acute understanding of craftsmanship and detail.

Huntsman first had the pleasure of meeting Hu when he visited Huntsman last summer, fitting in an appointment with tem in between his countless LC:M front row appearances. Hu demonstrated a genuine passion and decisive eye for bespoke tailoring and a familiarity with Huntsman’s iconic house style and choice of cloths.

Whilst Huntsman are less familiar with Hu Bing on British shores, he is something of a renaissance man in Asia; prolific as a top model, actor, singer, presenter, sportsman and philanthropist, his presence felt in Hong Kong, China and Japan.  Over the years he has modelled for brands such as Louis Vuitton, Valentino and Dunhill.  His many skills have seen him win a plethora of awards and nominations, including Best Actor at the Rome International Film Festival. Hu’s multi faceted profile means that he counts over 10 million Weibo followers amongst his audience.

Robert Bailey is a senior cutter at Huntsman and dedicated to looking after their customers in Asia. He makes regular trunks show visits to China, Singapore, Hong Kong, Tokyo and Seoul. Together with Special Client Manager, Ross Carson, Robert measured Hu for a three piece suit during his summer visit, advising on a luxurious, charcoal grey super 150s micro stripe suiting, woven by historic textile house Scabal at its mill in Yorkshire.

Hu’s single breasted suit with its one button fastening follows our distinct house style, but is cut with peak lapels for a more contemporary finish and matching double breasted waistcoat to enhance the suit and create a separate look when worn on its own.  A discreet yet noteworthy detail is the inclusion of Hu’s initials on the in-breast pocket of the suit, together with a small monkey, both embroidered in red and and paying homage to Hu’s Asian roots and the forthcoming Chinese New Year.

Robert fitted Hu for his suit both in Shanghai and London, getting it ready for his return to the capital this month. Hu will showcase his suit at the Ambassador’s Project party on the opening night of London Collections Men. Hosted by Huntsman owner Pierre Lagrange, the Woolmark Company and the Savile Row Bespoke Association, the event will bring together appointed LC:M ambassadors, each wearing a suit cut for them by members of the Savile Row community and showcasing the skill and aesthetic that goes into bespoke tailoring. The suits will highlight their “slow fashion” qualities at a time of fast fashion and compromise. “Slow fashion” or “slow tailoring” does not refer to trend, but to the timelessness and consideration within each piece of clothing, its sustainability and provenance guaranteed by a blend of experienced craftsmanship and the use of merino wool.

During his June visit, Hu’s eye was also drawn to Huntsman’s bold pink tweed, cut into one of our sports jacket. An instant hit, he didn’t take it off, going on to wear it for the remainder of his stay in London.  The soft pink ground and blue overcheck have a transformative effect when worn, their soft hues providing a fantastic ground for shirts, ties and accessories, providing a versatility that makes the tweed suitable for town and country and pushing the boundaries of its more traditional colour palette for a modern and refreshing look. 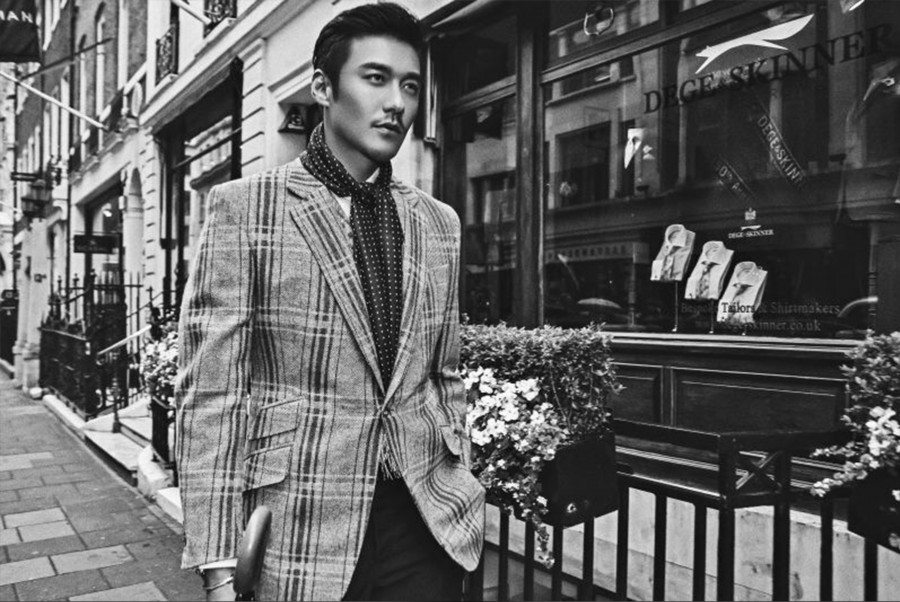