Eat Dust is a Belgian denim brand based in Antwerp that is fueled by friendship and mutual interest. Eat Dust officially began life almost 7 years ago when Rob and Keith started the company out of their garage. They’d been friends for a few years before that and had pretty much been talking about doing something for themselves since the day they met. The guys chose the name Eat Dust over beers in their local bar and sketched-out their signature handlebar stitching on the back of a beer coaster, it was from that moment, Eat Dust really ‘kicked off’. Today it’s still just Rob and Keith running the company but thankfully they’ve also had a lot of friends help them out along the way. Eat Dust is not into making fashion, Eat Dust is about proper garments that will stand the test of time.

Red Wing Shoes was built on America’s great promise; if one worked hard enough, one could achieve anything. Since 1905, that work ethic is poured into every cut and stitch that crafts a Red Wing boot. From the first boot to leave the factory floor, Red Wing has proudly stood for not only getting the job done, but getting it done right. By combining the finest leathers and quality materials with uncompromising craftsmanship, Red Wing’s Heritage collection continues to build upon a legacy of USA-made excellence so the boots built tomorrow are as enduring as the boots built 100 years ago.

There has always been a natural bond between the two brands, based on mutual interests in quality, style, craftsmanship, materials, motorcycles, design, art, traveling, and work. We often see each other at different events in different places around the world. We usually meet at occasions at which fine drinks, nice food, loud music, and good times play an important role. It was at one such occasion that the first idea of a collaboration was born. Rob and Keith are long time Red Wing fans and have always had a special love for the Pecos style, so it was a natural decision to work together on a special Pecos boot. It was not long into the designing process that the decision was made to go with a two-tone red colored Pecos. Based on this idea, the Red Wing Shoe Company owned S.B Foot Tannery made the two special tanned leathers Oro-Russet Portage and Oro-Russet Abilene that now form the base of the Eat Dust x Red Wing Pecos, style #4327.

Don’t wait too long to get your Eat Dust x Red Wing Pecos, style #4327! This is a limited one-time production and only available at select locations. Look for stores that carry both Eat Dust and Red Wing and check out the Red Wing Shoe Stores in Europe and Japan. 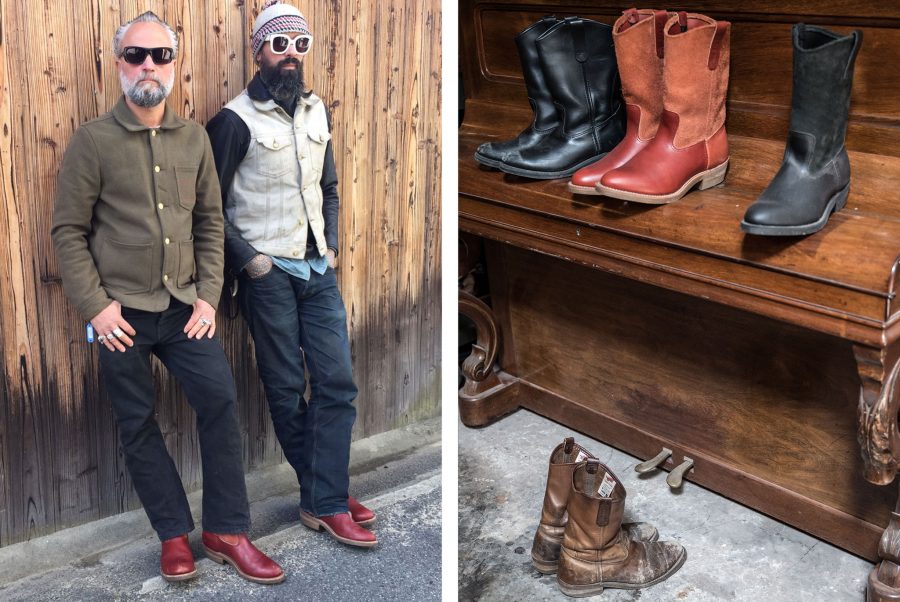